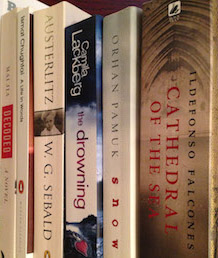 From time to time, this blog showcases books in translation to tempt readers to explore writing from countries that do not always make it to the bestseller lists. But we often overlook the work of the translator, who has not only to be fluent in two languages but has to be able to write. The fact that we read books written in other languages is not simply because they have been rendered into another language (English, in this case) but also because the translation does justice to the original.

Rachel Cooke in this article for The Guardian, says that the quality of the translation is paramount.

“Last year, I decided to treat myself to a new copy of Bonjour Tristesse by Françoise Sagan, a novel I have loved ever since I first read it as a teenager, and whose dreamy opening line in its original translation from the French by Irene Ash – “A strange melancholy pervades me to which I hesitate to give the grave and beautiful name of sadness” – I know by heart. But which one to get? In the end, I decided to go for something entirely new and ritzy, which is how I came to buy the Penguin Modern Classics edition, translated by Heather Lloyd.

Some days later, in bed, I began reading it. The shock was tremendous, disorienting. “This strange new feeling of mine, obsessing me by its sweet languor, is such that I am reluctant to dignify it with the fine, solemn name of ‘sadness’,” went the first sentence, which sounded to my ears a little as though a robot had written it. For a while I pressed on, telling myself it was stupid to cling to only one version, as if it were a sacred thing, and that perhaps I would soon fall in love with this no doubt very clever and more accurate new translation. Pretty soon, though, I gave up. However syntactically correct it might be, the prose had for me lost all of its magic. It was as if I’d gone out to buy a silk party dress and come home with a set of nylon overalls.”

Read the full article on The Guardian website. Cooke’s article is followed by short pieces by translators of some well-known foreign writers.

2 thoughts on “Recognizing the Talent of the Translator: The Subtle Art of Translating”