One of the giddy pleasures of joining a reading challenge of the kind we’ve been engaging in—to read around the world—is that you can zig-zag around the world in ways that regular travel would not allow. Your trajectory lands you bang in the middle of cultures, at the center of worlds at once unfamiliar and intimate, disturbing and exhilarating, your journey wrought by the words of storytellers who know their subjects better than any tourist guide.

So the past few months I’ve travelled across three continents—no four—with authors who’ve drawn me an insider’s map to their worlds.

I began, on New Year’s eve, in South Korea with Han Kang’s The Vegetarian, a surreal portrait of a woman’s rapid withdrawal into herself, the only way in which she is able to deal with the violence of human existence. The winner of the 2016 Man Booker Prize, Kang has been described by The Guardian as “one of South Korea’s best kept secrets”. Yeong-hye, the protagonist of the novel, is an ordinary woman from an ordinary middle-class family living an ordinary life…until she decides to stop eating meat. Her family cannot understand this decision, initially seeing it as a quirk, then as stubbornness, and finally as illness. The story is told in three parts, from three different perspectives: that of her husband, her brother in law for whom she is first a muse and then an object of desire, and her sister, who also ends up as her carer. We see Yeong-he only as reflected through their eyes, and occasionally, through her dreams that find their way into these alienating narratives. This is a book that intrigues rather than enchants. It draws out in deadpan fashion the hypocrisy that underlies our everyday lives while also in some strange way showing us that resistance is possible, though it might end up consuming us.

A happy contrast to the darkness of Kang’s novel was the small blue book from Finland, The Summer Book by Tove Jansson. The windswept island that is home to Sophia and her whimsical grandmother is small enough to walk around in an hour or less but large enough to offer magic and discovery to an earnest little girl. Here, wisdom resides in the tiny acts–of walking along the beach, of looking out to sea, of taking a nap in the woods, of finding a bottle in the sand. “Only small things happen in the islands, but these too…have to be dealt with.” And while Sophia and her grandmother deal with these many small things, they have hundreds of delightfully sparse conversations that make us fall in love with the way they are.

And then I veered back Eastward to Turkey, with Elif Shafak’s The Three Daughters of Eve–a story that unfolds during a bourgeois dinner party in a swanky riverside bungalow in Istanbul. Pericim, who has just emerged from a close encounter with a petty thief, spends the evening resenting the party and instead traveling across the decades to when she was a student at Oxford, under the spell of a brilliant philosophy professor whose seminar on God held her–and several other young women–in thrall. We spend the evening with Peri and the other guests, now privy to their desultory high-society chatter, and now, running with her along the Oxford streets clutching piles of books and figuring out her place in an increasingly polarised world. I found the novel somewhat unsatisfying, with loose ends that left one turning back pages to check if there were answers earlier on. I had picked up the book mainly to read someone from the country other than Pamuk–I guess I’ll have to keep looking!

I made one other stop, in Bulgaria, with Alek Popov’s The Black Box, funny in parts, disturbing in others, where two brothers, widely (and wildly) different, are spun in different directions after a series of unfortunate events. Ned, who is a successful financial whiz on Wall Street, messes up at work and is despatched to find a missing director from the company, who seems to be involved in a quasi-legal situation in Bulgaria. In the meantime, Angel, unemployed, wins the green card lottery in the United States and travels there from Bulgaria, conveniently making Ned’s (now empty) apartment his home. What follows is like an absurd drama, with each brother becoming central to a different set of crazy circumstances, from a conspiracy among dog walkers to corporate espionage in Bulgaria.

But the joy of reading resides not in whether one “liked” a book or not, but in the journey the author takes you on, through context and culture, mood and meaning. And there, all four books scored. Bigly. 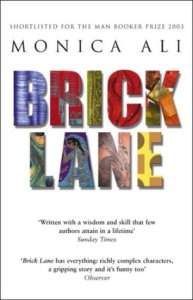 A portrait of the Bangladeshi community in London, Brick Lane follows Nazneen, a young girl from a village in Bangladesh who is married off to Chanu, an older Bangladeshi man, and moves with him to the UK.

During her early years in London, Nazneen’s world is confined to her apartment, crammed with furniture and knick-knacks. She speak no English, and her human contact is, for the most part, restricted to the tattoo lady in the apartment opposite, who sits at the window smoking and drinking beer and barely notices Nazneen as she waves to her. Slowly, Nazneen’s world expands, and she gets to know some of the Bangladeshi women who live nearby—Razia, with a strong sense of fun and a great mimic, whom Chanu dismisses as “not respectable”, and Mrs. Islam, bossy and intefering, whom he holds in high esteem.

Nazneen settles into her new life, starts working as a seamstress, and they have two children. The story picks up pace when Nazneen meets Karim, a young radical, who brings her sewing work, and starts a passionate affair with him.

The story is told in third person from Nazneen’s perspective, and reflects her understanding of the world around her. The characters are well drawn and grow over the course of the book as they reveal themselves to Nazneen, a perceptive observer. Chanu is a kind-hearted man with dreams that he cannot realize, not because the dreams are too big but because he is more talk than action. Their flat is filled with his certificates, many of them worthless. Although he is pompous and has a tendency to hold forth, he is aware of his shortcomings. The relationship between him and Nazneen is tenderly described as they develop a closeness over the years.

Brick Lane is a book about the immigrant experience. It is something that fails Chanu, and he decides to take his dreams back to Bangladesh. Karim, who has spent all his life in London, rediscovers his religion and tries to organize the young people of the community into the Bengal Tigers, partly to take on racists—an experiment that doesn’t really work either. The women in the book—Nazneen, Razia and Mrs. Islam—are stronger and more successful, each in her own way carving out her path.

However, there is one weakness, and I think it really detracts from the book. This is the parallel story of Nazneen’s beautiful sister, Hasina, in Bangladesh. Just before Nazneen leaves, Hasina elopes with the nephew of the sawmill owner, who turns out to be a bully. (Why do fictional women who elope always end badly?) She leaves him, becomes a garment worker, is thrown out on trumped-up charges and becomes a prostitute. All this is told in her badly written letters to her sister. It’s as if Ali felt that a book about Bangladeshis needs to tackle garment workers, prostitutes and acid attacks. The letters are too brief to do the any of these issues justice. Unlike those in London, the characters do not come alive, not even Hasina.

And in the sections about Hasina, there is no trace of the humour that permeates the rest of the book—the sharp observations of human frailties. For example, the decline of the “respectable” Mrs. Islam is caught by the way she wears her hair: “And the hair on her head was not tied tightly, as it usually was, in a neat spool of white held together by the invisible powers of Godliness and elastics. Now it more nearly resembled the nest of a slovenly and spectacularly incontinent bird, and it glittered with the demented treasure of dozen black metal pins.”

The book could have been shorter and would have been better for it. But that apart—and this was Ali’s first novel—I did enjoy the writing and the characters. They felt real and like people I might know. 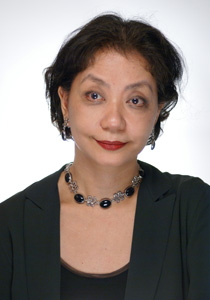 Mark A. Heberle reviews Minae Mizumura’s The Fall of English, which looks at how English dominates not only science and the internet, but also publishing, and what this means for other languages, especially Japanese. To quote from the article:

“This powerful, insightful work analyzes the predicament of world languages and literatures in an age when English has become the universal language of science and the default language of the internet. Even for creative writers, it is the virtually inescapable medium for those desiring to be taken seriously in an age of globalized discourse. …

“Mizumura’s experiences…ground the theoretical, historical, and autobiographical arguments that make up the book. Her experiences in Iowa with more than 20 ‘writers writing in their own language’—including literary artists from China and Korea, Norway and Lithuania, and a poet from Botswana who writes in English—were the origin of The Fall of Language, since they raised initial questions about the challenges facing local languages and literatures.”

Read the article on the website of The Clairemont Review of Books.