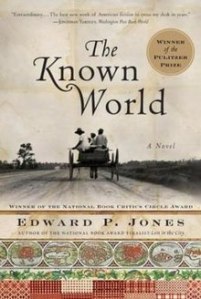 A little-known fact about slavery in the United States is that a few black people owned slaves. In some cases, freed blacks bought their parents, spouses or children, but there were others who owned slaves for economic reasons.[1] This is the story that Edward P. Jones tells us in The Known World.

It begins with the death in 1855 of Henry Townsend, a black slave owner. Henry’s parents, Augustus and Mildred, were owned by a white landowner, William Robbins. Once Augustus had saved enough money, he bought his freedom and later Mildred’s. But Robbins was reluctant to part with Henry and kept raising the price. By the time Augustus had enough money to free Henry, he was a teenager and had absorbed some of Robbins’s ideas.

While Augustus and Mildred make a conscious decision never to own slaves, William doesn’t follow their example. Robbins takes Henry under his wing; he becomes a landowner and buys his first slave, Moses—with whom the book begins and ends—and then buys others who work in his house and on his fields. But when both owners and slaves are black—and often the owners themselves were once slaves—keeping clear boundaries between them can become a little complicated.

This is such a rich book that I am not going to summarize the plot because I would not be able to do it justice. Jones picks up on the nuances of human relations. No one here is wholly good or wholly bad. Each person comes alive and has his or her story told: Alice, a slave said to have lost her mind; Caldonia, William’s widow who now has the responsibility of running the farm; and Fern, a schoolteacher with a gambling husband. Jones narrates their lives and does it skillfully, so the book, instead of being a series of fragments, is instead a rich tapestry of life in the Southern US. The sheer number of characters means that I sometimes had trouble keeping track of them. (There is a list, but it’s at the end, so I didn’t find it until I had finished reading the book.)

From time to time, Jones pulls back for a wide-angle shot, and we see the characters as they are now and as they will be. Elias, a slave on the Townsend property, whittles a doll for his little girl, Tessie, the day Henry dies. She is told by an adult that it is not right to skip when someone has died. “Tessie would soon be six years old and being the child of her parents who she was, she listened and stopped skipping. Tessie would live to be ninety-seven years old, and the doll her father was making for her would be with her until her last hour.” Tessie was both the child and the old woman, much as we all are—the sum of our various selves at different stages in our lives.[2]

Slavery was an insidious institution and tainted all who came in contact with it, whether slave or free, or black, white or Cherokee. There is plenty here about the cruelty, repression and injustice of the period, but there is also love, understanding and attempts—sometimes successful—to break free of the chains. The book picks up the lives of those who survive and manage to go north to forge better lives.

I would recommend this book: it is beautifully written and one of the best  I’ve read this year.

[1] If you want to know more about this, read “Did Black People Own Slaves?” on The Root.

[2] Paul Auster does something similar in Winter Journal.

One thought on “The Known World: Edward P. Jones”