By imagining many possible worlds, argues novelist and psychologist Keith Oatley, fiction helps us understand ourselves and others.

“For more than two thousand years people have insisted that reading fiction is good for you. Aristotle claimed that poetry—he meant the epics of Homer and the tragedies of Aeschylus, Sophocles, and Euripides, which we would now call fiction—is a more serious business than history. History, he argued, tells us only what has happened, whereas fiction tells us what can happen, which can stretch our moral imaginations and give us insights into ourselves and other people. This is a strong argument for schools to continue to focus on the literary arts, not just history, science, and social studies.

“But is the idea of fiction being good for you merely wishful thinking? The members of a small research group in Toronto—Maja Djikic, Raymond Mar, and I—have been working on the problem. We have turned the idea into questions. In what ways might reading fiction be good for you? If it is good for you, why would this be? And what is the psychological function of art generally?”

This new book by Jhumpa Lahiri is a powerful and riveting story. Set in Calcutta post independence, the book is the story of two brothers through the complex and tumultuous period of the birth of the Naxalite movement in West Bengal. The two brothers, Subhash and Udyaan take divergent paths, the former, being the obedient son choosing an education and a life in the US, while Udyaan gets drawn into a new political scenario unfolding in India at the time. The first part of this book outlines the lives of the two brothers in India and the US, shifting the focus in the latter half, when a tragedy disrupts forever the lives of three generations to come.

The book is part political saga and part a personal journey. The story moves from one of hope and change to one of loss, despair and guilt. What seems to me however as most perplexing, is the inability of the characters to adapt or change to the circumstances unfolding before them. The tragedy affects them all through the ages, with the characters every action, every move somehow being driven by it.

Having never read Jhumpa Lahiri prior to this however, I must say it was a good read. Her characters were beautifully complex and her words created a raw and painful world within which they lived.

Two naïve Irish-American scholars travel to Albania in the early 1930s in search of the origins of epic poetry—in particular, of Homer’s epics. And the only place where oral epic poetry still exists is in Albania. As far as they are concerned, it is simple: travel to the town of N__ in northern Albania with a new invention, the tape recorder, and record various rhapsodes there over a period of time. This would prove that the Illiad and the Odyssey were changing, oral poems from the region that had been given a definitive shape by Homer. This study would bring them fame in the academic world.

Except that in 1930s Albania, it is never quite that simple. News of their visit sends ripples of alarm among government officials. The interior minister orders the governor of the region to assign a spy to follow them all the time. The spy speaks no English, which does not deter him from doing his job. The minister is concerned that the two visitors are up to no good. Why else would they choose to go to an unheard-of small town with a tape recorder? In the town, meanwhile, the governor wife dreams of romance and plans parties for them. The scholars, who have not bargained on being the centre of a social scene, flee the town for the countryside as soon as they can, and begin their research at a roadside inn. But the Serbians across the border take umbrage at the fact that the scholars are looking only at Albanian epic poetry and ignoring the superior poetic traditions of Serbia.

The book moves between third-person narrative and excerpts from the scholars’ diaries. The language is old-fashioned, which works, considering that the book is set in the 1930s. And there is a lot of satirical humour in it: the scholars’ archaic Albanian, the governer’s admiration for the spy’s literary flourishes (his reports come by letter), and the goings-on at the inn.

The author, Ismail Kadare, gives the reader a glimpse into the rhapsodes and their way of life. I thoroughly enjoyed the discussion about how epics are created and how they change with each retelling until they settle into the shape that someone gives them by transcribing them. 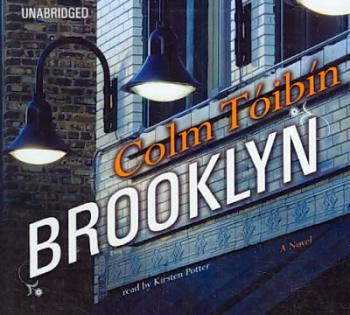 This book describes the first two years that a young girl, Eilis, from Ireland spends in Brooklyn when she emigrates to the US in the 1950s. On the face of it, it ought to be a rollicking ride: with a sudden departure, a rough passage, homesickness and loneliness, and all the trials of adapting to new people and a completely new way of life.

However, Eilis is such a rational creature that most of the drama is reasoned out of the novel. For example, when homesickness hits, it nearly costs her her job in the department store which depends on her being a cheerful salesperson. When she realises the gravity of the situation, she simply says to herself, “Well, in which case I’d better not be homesick then”. With that, the whole issue is resolved and the story moves on.

The novel is written entirely in the style of the protagonist – a consistency which in theory is good literary practice. However, given the nature of the main character, the result can be plodding, sometimes bordering on school essay style. For example, when she gets letters from her distant boyfriend about whom she has–in her own cautious way–been passionate, the authorial voice simply narrates that:

“she was relieved when she read the opening sentences that declared his love for her and emphasized how much he missed her.”

The novel starts to gather some oomph towards the end, when Eilis gets herself into a rather messy situation, caught between potential, and–in the way it’s told–not in fact hugely dissimilar futures in Brooklyn and in Enniscorthy.  What I missed was more reflection on what each future could hold for a young girl in so different contexts as New York City and rural Ireland, especially as Eilis recognises that whatever decision she makes will hurt someone she loves. But instead, an external mechanism makes up Eilis’ mind for her.

Indeed, that was perhaps the most interesting thing the novel had to say: that the options for a young woman in the 1950s, whether in a backwater or a big city, basically revolved around finding the right man and keeping house and family for him, even if she is clearly intelligent, self-disciplined and more than equipped to do other things. This is especially ironic as she has (more by chance then her own volition) got herself to Brooklyn where other options are more available to her than back home in rural Ireland. But Eilis is not a feisty feminist heroine, even though she has the potential to be one, and is perhaps turning into one as she matures.  Is it then refreshing to read such a realistically young woman’s story? Maybe, but then it would have been interesting to hear more about the conflicts between her own inclinations and what the world around her expected of her. Instead we have a mildly frustrated conformist’s tale.

After I read the book and wrote this review, I looked at some other reviews to see if I had missed something in this novel, as the author is so renowned. Here’s a link to a Guardian review which gives you a different take on the style. What I found uninteresting and plodding is apparently “a minimum of fuss and portentousness, using simple words and a precisely controlled tone”.

Would love to hear a third opinion! 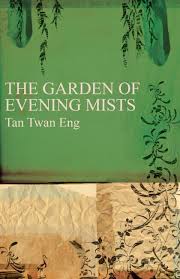 The Garden of Evening Mists is the story of Yun Ling Teoh, a survivor of a Japanese POW camp in Malaya during World War 2. Now a lawyer, Yun Ling returns to the hills of the Cameron Highlands to fulfil her dead sister’s dream of creating a Japanese garden.

Her hatred for the Japanese makes it difficult, but she chooses to live and work alongside a Japanese Gardner, Aritomo. A former gardener to the emperor of Japan, Aritomo accepts her as a pupil only “until the monsoon arrives”, for then she can create her own garden. Yun Ling is ultimately drawn in by her master and we are drawn into a world of the various aesthetic principles of Japanese garden making such as Shakkei (borrowed scenery) and Irezumi (the art of Japanese tattoo making). While this relationship folds out within the sphere of the Japanese garden, outside the highlands are ravaged by the communist uprising in Malaysia at the time. This threat of violence intertwined with the mysteries surrounding Aritomo and the survival of Yun Ling in a POW camp herself makes this story an intriguing and memorable read.

NOTE: The book is a wonderful read for those who are interested in Post Colonial History and Literature.  Although fictional, much of the story in the book is historically bound with the pre independence movements in Malaysia in the 1950’s.

A gangster book with a

difference. We follow a professional hitman, Calum MacLean, as he figures out how he is going to kill Lewis Winter, a smalltime drug dealer who has become a thorn in the side of a powerful criminal gang. The book is set in Glasgow, which over the course of the story, emerges as a character in its own right. MacLean takes his time, following Winter around, getting to know his habits. The hitman is a consumate professional: he believes in killing cleanly, focusing only on the target and ensuring there are no other casualties.

But there are other people in the mix: Winter’s demanding girlfriend, Zara Cope; Zara’s lover, Stewart Mcintosh, who is in way over his head; and PC Marcus Mathieson, who plays both sides but tries to hold on to his integrity. Other people make things unpredictable and messy. The man who ordered the hit, Peter Jamieson, wouldn’t hesitate to throw MacLean to the dogs if he thought things were getting messy. And MacLean is soon fighting to stay alive.

The most striking thing about the book is the voice—unhurried, matter of fact, without any dramatic flourishes. Very much like MacLean himself. I found myself rooting for him, in spite of what he does for a living. It’s unusual for a book in this genre—there are no pyrotechnics, but the pace never lets up.