I have several books of poetry on my shelf…and now, on my Kindle. I leaf (or swipe) through them in the spaces between fiction, when I am recovering from an intense or troubling story or when the weather puts me in the mood for contemplation rather than escape. There are some I return to periodically, like making a phone call to an old friend, in an attempt to find those pools of quiet in my noisy life. Mary Oliver, A K Ramanujan, Elizabeth Bishop, and good old Eliot. A recent happy discovery has been Clive James, whom I first encountered on a New Yorker podcast reading his very popular “Japanese Maple”—which you can listen to here. 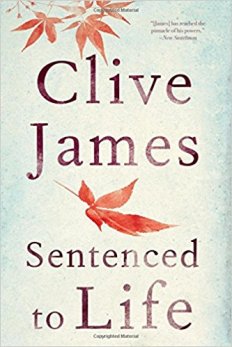 Since then, I have dipped into James’ poems often, and my most recent favorite is the collection Sentenced to Life (Picador, 2015), work written between 2011 and 2014, a period when he seems to be settling into a comfortable relationship with death. James is a memoirist, critic, television commentator and poet, and in each of these roles the gentle power of his words—and an underlying humor and empathy—is unmistakabl

Many of the 37 poems in this volume reflect a sense of sadness yet an eye for the beauty of small things, such as that Japanese maple in his backyard. So in “Driftwood Houses”, while he acknowledges that “Disintegration is appropriate” he remembers the driftwood houses that he built “…for our girls to roof/With towels so they could hide there in the shade/With ice creams that would melt more slowly.” Or, in the title poem: “My daughter’s garden has a goldfish pool/With six fish, each a little finger long./I stand and watch them following their rule/Of never touching, never going wrong:/Trajectories as perfect as plain song.”

Reading through the poems is like spending a lazy Sunday looking at life in slow motion, stopping at moments that suddenly seem meaningful, telling you something about yourself, your vanities, your loves, and your frailties. Clive James recalls scenes from old movies (he is after all a film buff); in one we might suddenly encounter  Catherine Zeta-Jones and in another, Ava Gardner. At other times he unearths cultural trivia (remarking that Tolstoy makes “a midget of your [Napoleon’s] memory”), but refusing to take any of it too seriously.

Not all of it resonates, of course, and not all of it is lyrical, but there is enough in the slim volume to make dipping into it worthwhile, on a lazy Sunday afternoon.