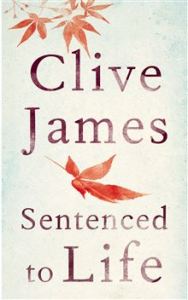 These are poems written by a man who is sick and dying. But, surprisingly, this is not a depressing book. Clive James—a writer, critic, broadcaster and more—looks at his life and imminent death with honesty, clarity and a sense of humour. As he says in the acknowledgements, “you can say that you’re on your last legs, but the way you say it might equally suggest that you could run a mile in your socks”. There is no false cheerfulness—he is at the end of his life and not at all well, and there is no getting away from that—but in a strange way, I found it uplifting. Maybe that is because he appreciates how fragile and therefore how precious life is, and that is something worth being reminded of.

James talks about the travails of being sick and frail, of taking more time to do everything—write, climb the stairs and walk down to his favourite café. But he keeps his sense of humour. My Latest Fever finds him on drugs at the hospital, hallucinating about Sylvester Stallone: “Teeth/were gritted… No one grits/Like Sly: it looks like a piano sneering”. The poems show a man still interested in the world around him, writing about subjects as diverse as female pandas, the wife of Bashar Al Assad and ham actors.

James spent a lot of his working life travelling and being away from his family, and being forced to stay home makes him realize the precious moments he has lost. In Balcony Scene, a love poem to his wife of many years, he apologizes for hurting her but does not take her forgiveness for granted:

“Or so he says, you think. I know your fear
That my repentance comes too easily.
But to discuss this, let me lure you here,
To sit with me on the stone balcony.
A hint of winter cools the air, but still
It shines like summer. Here I can renew
My wooing, as a cunning stranger will.
His role reversed, your suitor waits for you.”

The overwhelming feeling in this collection is the preciousness of life, of living and appreciating every moment: “he feels the power/Of all creation when he lifts a book/Or when a loved one smiles at his new joke”. And of coming to terms with his life as it is now. His deafness, in a way, is a release: he does not have to guess at meanings at parties; he is content to sit there. “You were the ghost they wanted at the feast,/Though none of them recalls a word you said”.

In conclusion, I am simply going to quote from what has become one of the best-known poems of this collection, Japanese Maple:

“My daughter’s choice, the maple tree is new.
Come autumn and its leaves will turn to flame.
What I must do
Is live to see that. …
A final flood of colours will live on
As my mind dies,
Burned by my vision of a world that shone
So brightly at the last, and then was gone.”