Strange fruit–the title of a song by Billie Holliday that’s been playing on my car stereo, and I can’t get it out of my mind…nor can I get the images it evokes out of my head.

It kept playing in my head as I read Colson Whitehead’s Pulitzer-winning novel The Underground Railroad (Random House, 2016), the story of Cora, who travels from bondage to an elusive freedom along that legendary trail taken by so many desperately hopeful slaves in the mid-nineteenth century. Like her mother before her, Cora flees the brutality of a cotton plantation in Georgia to embarks on an arduous journey through the states of a loose federation. Her escape is doubly complicated when she causes the death of a white pursuer, marking her as a wanted woman—an escaped slave and a murderer.

Cora’s first stop is South Carolina, where she encounters learning and a short-lived taste of independence before the ruthless slave-catcher Ridgeway shows up and she needs to flee once again. The secret network of safe houses and pathways takes her next to North Carolina, where she lives for months ferreted away in the tiny attic of a reluctant savior couple until Ridgeway discovers her and drags her away, even as an angry crowd calls for the public lynching of the couple. Cora manages to escape once again with the help of a freeman in Ohio, but Ridgeway’s shadow does not quite leave her path, catching up with her years later, making real freedom forever elusive, forever illusory.

The Underground Railroad is not an easy read, but it is riveting. Cora’s story—a possible fiction—is interspersed with the traces of other stories, of other escapes, told through handbills and posters of the day, revealing in their matter of factness.  For every African slave that reached the north, hundreds were caught, punished in horrible ways, and lynched, their bodies becoming the strange fruit that Cora encountered along the roads in North Carolina and Virginia.

Some stories can never have real closure. 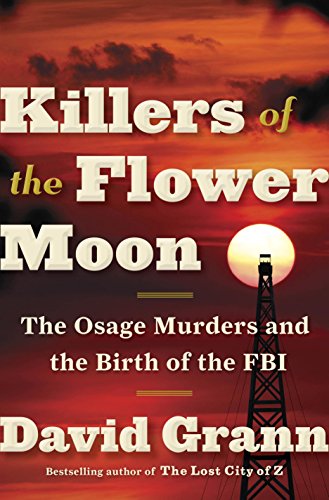 Perhaps it was no coincidence that I moved on to another book that opened for me another chapter in the history of the United States: Killers of the Flower Moon by David Grann (Random House, 2016). Based on painstaking documentary research and scores of in-depth interviews, this work of narrative non-fiction tells the story of a series of mysterious deaths of Osage tribespeople in the oil rich lands of Oklahoma in the early part of the twentieth century. Tying together the various threads of an incredibly complex story, beginning with the death of a young Osage woman who failed to return home after a party at her sister’s, through the persistence of a Texas ranger-turned FBI agent, to the early years of J Edgar Hoover’s FBI, Grann uncovers something that is part conspiracy, part opportunism, but complete tragedy.

The Osage were among the many tribes that were driven westward by the expanding needs of a growing (white) nation and like other Native American peoples, were handed a parcel of land to compensate for what they had lost. The Osage were given a large tract of rocky, inhospitable land in Oklahoma, but soon the area was found to be extremely rich in oil, and greedy prospectors and businessmen converged on the tribe to purchase drilling rights. The Osage grew wealthy but federal laws restricted access to their own money, and in most cases every tribes person was assigned a white guardian who managed their assets. Grann describes the systematic plunder of the Osage’s wealth—through cheating, duping gullible wards, and in many cases, murder that led to the property being acquired by a guardian.

While The Underground Railroad is fiction that forces us to confront the facts of history, Killers of the Flower Moon uses narrative to draw us into a story that could so easily be forgotten. Together, they remind us of the original sin(s) upon which the American nation is constructed—genocide and slavery.  The purpose of such stories—fiction or reality—is not to build rancor or stoke resentment, but to nurture compassion and empathy, and maybe, to force us to be vigilant and “woke”.

One thought on “Some histories can never be reconciled”