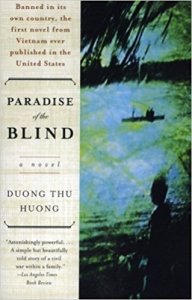 It seems like a lot of the stories about Viet Nam are about the war, and that too from the American perspective. The country itself seems to disappear, merely providing a backdrop to the narratives of US soldiers. But what about the lives of ordinary Vietnamese?

This book provides an glimpse into those lives. It’s about three women—Hang, a young woman studying in the Soviet Union in the 1980s, her mother and her aunt Tam. It is narrated by Hang as she travels by train to Moscow to see her Uncle Chinh.

Hang never knew her father Ton, and it takes years before Hang learns the story from her mother. Ton was her great love, but her brother Chinh tore the family apart. In the mid-1950s, Viet Nam went through a land reform campaign. Villagers were intimidated into denouncing their “landlord” neighbours, who often only owned a couple of acres of land. The “landlords” were arrested and sent to labour camps, judged by courts of illiterate peasants. Like Chinh, who accuses Ton of being a landowner and forbids his sister from having anything more to do with him.

Although the Communist Party eventually apologised for the “error” of the land reform and carried out a “Rectification of Errors” where people were sent back from the labour camps, Ton does not return. His sister Tam survives. She is a strong and hard-working woman with “nerves of stone”, and has never forgiven Chinh for destroying her brother. When Hang’s mother takes her to finally meet her aunt, Tam is a wealthy woman. As Hang is now her only family, she devotes her life to ensuring her well-being.

Hang’s mother is a street vendor, and Tam’s generosity creates a divide between mother and daughter. The mother could never give her daughter what Tam can. So she, in turn, focuses on Chinh and his family, saving whatever money she can to buy them food and treats. At least, she feels, this family needs her, unlike her daughter. Hang resents this, especially when she has to go hungry because her mother is spending money on Chinh’s medicines. (Her mother figures Tam will come to the rescue, and she does).

Hang is caught between these two strong women. Both women are obsessed with their families and are prepared to do anything for them. The only way that Hang can survive is to break free is of this self-sacrifice.

Duong Thu Huang describes what life was like for ordinary people in Viet Nam: street vendors, party officials, villagers and students. She describes the food in great detail—which, as a foodie, I found fascinating. But Duong uses it to indicate wealth or the lack of it, from the lavish meals that Tam prepares to the “pickled white cabbage fried in a spoon of fat” in her mother’s house.

Duong is also very perceptive about people and their motivations. A young student tells Hang that her Uncle Chinh is like many people he’s known, who have “worn themselves out recreating heaven on earth. But their intelligence wasn’t up to it. They don’t know what their heaven is made of, let alone how to get there. When they woke up, they had just enough time to grab a few crumbs of real life, to scramble for it in the mud, to make a profit—at any price. They are their own tragedy. Ours, as well.”

This book, like Duong’s other novels, has been banned in Viet Nam for being critical of the Communist Party.