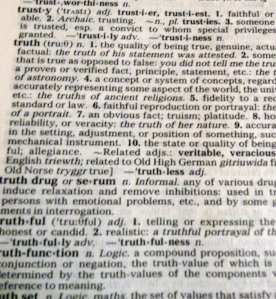 Adam Kirsch on the problematic relationship between truth and lies in writing.

“Reality is the ingredient that turns a bad fiction into an enthralling one.

“This dynamic is part of the novel’s origins. The earliest English novels, from ‘Moll Flanders’ (1722) to ‘Clarissa’ (1748), were published anonymously, with titles that implied they were true stories. It took generations to establish the conventions of fiction sufficiently to allow readers to take pleasure in novels that were explicitly untrue. The suspension of disbelief that fiction involves is a late stage in the evolution of taste, and it may prove to have been a temporary one.

“The rise of the memoir over the past few decades doesn’t mean that readers are ready to abandon the techniques of fiction; but, like readers three centuries ago, they want the freedom of fiction along with consequentiality of fact.

“The problem with our ‘post-truth’ politics is that a large share of the population has moved beyond true and false. They thrill precisely to the falsehood of a statement, because it shows that the speaker has the power to reshape reality in line with their own fantasies of self-righteous beleaguerment. To call novelists liars is naïve, because it mistakes their intention; they never wanted to be believed in the first place. The same is true of demagogues.”