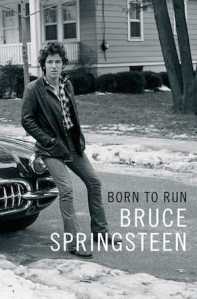 It was in the early 80s that I first heard Bruce Springsteen. Looking for new music, I raided the tiny music shop in Secunderabad (India) and picked up Born to Run. I was hooked. The music spoke to me, although I was from a different culture and a different continent—it was the feeling deep down inside of needing to be on the move (and I thought Thunder Road was one of the best love songs I’d heard). I’ve been a fan of his music ever since.

So I was excited, but a little nervous, when this book came out. Did I really want to get to know someone I admired? Maybe there is something to be said about keeping a distance.

He didn’t disappoint. The book is funny and poignant and above all, honest. You do get to know Springsteen better, warts and all. He doesn’t gloss over the problems he had getting close to people, his depression and his single-minded ambition. Although the writing can be lyrical, it is not polished—he tends to throw around ellipses and words in capital letters (which can be a bit disconcerting) and strings of adjectives. But this makes his story feel immediate. You can really feel what it must have been like to be young and full of music—and hormones! And it’s a distinct style, which I liked, rather than a bland recounting of events that you sometimes find in autobiographies. His passion for music, and for making music, shines throughout the book.

Springsteen grew up in New Jersey, son of an exuberant Italian mother and a misanthropic Irish father (with some Dutch heritage, which explains the surname). The father’s frustration and anger would come out when he’d been drinking and would often erupt on his son for not being tough enough. Looking back, Springsteen is able to see his father more clearly: “beyond his rage, he harboured a gentleness, timidity, shyness and a dreamy insecurity. These were all the things I harboured on the outside and the reflection of these qualities in his boy repelled him.”

Springsteen knew quite early that the only thing he could do with his life was make music. He started out with rock—one of his early bands was Steel Mill that played “primal rock” with long guitar solos. Inspired by Bob Dylan and wanting to write about his experience and the world he lived in, he started working on songs that became his first album, Greetings from Ashbury Park. That was the beginning of the long road for Bruce Springsteen and the E Street Band. They have played together for almost 40 years. I saw them in Bern in 2009, their last tour with the charismatic saxophonist, Clarence Clemons, to whom Springsteen dedicates a chapter. Of Clemon’s death in 2011, Springsteen says “losing him was like losing the rain”.

Springsteen dealt with the emotional scars left by his father by never allowing anyone to get really close and staying constantly on the move. But you can’t run from yourself, and it was only a matter of time before depression caught up with him, “spewing like an oil spill over the beautiful turquoise green gulf of my carefully planned existence”. He got through it, mostly, with help from his wife Patti Scialfa and his manager Jon Landau. But through it all—through the depression, the fame and the wealth—he’s never lost touch with reality.

His songs are often about ordinary people trying to get by. He captured 9/11 in The Rising, and the financial meltdown of the late 2000s in Wrecking Ball. I enjoyed the time I spent in his company, and hope he carries on doing what he has been doing all these years: reminding us that the “other” isn’t really all that different from us. And in this fraught time, when societies are so divided, this message is more important than ever.