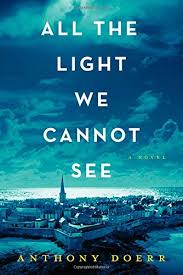 Set during the darkness of World War II, All the Light We Cannot See is a powerful and emotional novel. It follows a young boy and a girl caught up on each side of the whirlwind of Nazism and war. Werner, a poor orphan drafted into a special school for Nazi cadres and then the Wehrmacht and Marie-Laurie, a blind girl living in Paris with her father, whose life is turned upside down by the German invasion. The fates of Werner and Marie-Laurie slowly weave together over the course of their young lives, finally merging in the picturesque town of Sant-Malo during heavy bombardment.

Werner and his sister Jutta live in a cramped, impoverished and dirty home for orphans in a dead-end coal mining town in the Ruhr. Until his extraordinary scientific abilities and talent for mending radios attract attention, it seems that his life will follow the same predictable course of all poor boys in this town and that he will be broken – and like his father, possibly killed – in the coal mines. Werner seemingly escapes his fate by being sent to a special school for Nazi elites, where he is exposed to predictable cruelty, but also meets his best friend.

Marie-Laurie is the daughter of a locksmith at the National Museum of Natural History in Paris. Falling completely blind at an early age, she nevertheless develops a curiosity for the world akin to Werner’s, encouraged by her loving father and nurtured by a childhood spent exploring the museum. Following the Nazi invasion, Marie-Laurie and her father flee Paris and the museum. Before they leave, the locksmith is trusted with the greatest treasure in the museum, a perfect but cursed diamond, the ‘Sea of Flames’. The diamond must be protected from the roving Nazi hunters at all costs, and the museum disperses a number of fakes among its scattered staff.

A mysterious radio broadcast that captivated young Werner and Jutta, the bravery and the stubbornness of the ordinary children and women who risked everything in the resistance, and the relentless pursuit of Nazi treasure hunters whose shopping list for the Reich extends to all of the cultural wealth of Europe, these all meet in the story’s climax, under the heavy bombardment of allied war planes and artillery shells in Saint-Malo in 1944. All the light we cannot see is dramatic and engaging, the reader is swallowed into the book, and it is difficult to set aside.

Insightful children move this novel – Marie-Laurie is beautiful, the simplicity of her goodness stands out, and the reader really wishes to discover what will happen to her; Werner, an undersized, but brilliant and caring child who must face his own crimes; Jutta, Werner’s sister who sees through Nazism from the beginning; and Frederick, Werner’s pure and unbending friend at the Nazi school – they would all be at home in one of Roald Dahl’s stories. Together they create a tension that carries the reader along the short, energetic, chapters.

Much of the beauty stems from the flickering of candles of humanity that could not be blown out by the winds of war. But, whilst not clichéd exactly, the mise en scène becomes somewhat transparent at points. The ritual evils lurking in the special school, a place which makes the dim reality of the mine shafts shine brightly by comparison, the flatness of some of the characterisations, a slightly mono-tone and unchallenging depiction of the failed Nazi dream. But these notwithstanding, it is an emotionally engaging tale. The war is described in a way that makes the reader feel the hunger, the brutality and the desperation of war, reminding us of the terrible suffering in large parts of the world today.