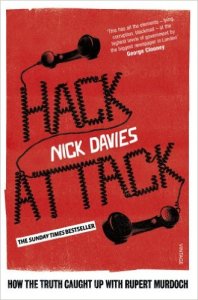 “If you shut up truth and bury it in the ground, it will grow and gather to itself such explosive power that the day it bursts through, it will blow up everything in its way.” Emile Zola

The first sign of trouble was a report in 2007 about the hacking of the telephones of three people working in Buckingham Palace. Four years later, the avalanche started by that seemingly insignificant story buried major figures in media, politics and policing. Nick Davies was the Guardian reporter at the heart of the exposé, and this is his account of how it happened. His book lays bare the extent of the power wielded by one man over British politics—a man who was not elected but who happened to own the biggest media conglomerate, News International. And given the time we are living in now, where fake news plays a significant role in shaping politics, this is a book worth reading.

It is a riveting tale—and sickening. Sickening in the way News Internationalist’s publications, especially the tabloids like the News of the World—the publication at the heart of the scandal—used any means to get a story, legality be damned. That is nothing new, but what made it different was that the News of the World journalists were accessing people’s phones and voice mails and then using quotes from those voice mails to write their stories. And this with the full knowledge of the editors.

Parallel to the phone-hacking scandal was the bid by Murdoch to buy the remaining share in the satellite TV channel BSkyB. News International already owned 39% of the channel, and Murdoch wanted to buy the remaining 61%. There were regulatory problems with the bid, which was the only thing Murdoch really cared about. He and his associates dismissed the hacking scandal, saying that the two had nothing to do with each other. They could not have been more wrong.

Initially, when the first story about the hacking came out, it was dismissed as the work of a rogue reporter at the News of the World. But Davies pursued it and uncovered a rot that went through the paper and touched those at the top, including the editor Andy Coulson whom David Cameroon appointed as his communications director (Coulson later resigned because of the phone-hacking scandal). But the most worrying thing about these revelations was just how much power News International had—many politicians cosied up to Rupert Murdoch and his associates, including his son James and Rebekah Brooks, who became editor of News of the World after Coulson. After all, they could make or break the politicians’ careers. That’s why the BBC had its funding cut—it was the only serious contender to BSkyB. Murdoch pushed, and Cameron did his bidding.

This cozy relationship between Murdoch and top politicians goes back all the way to Margaret Thatcher. In 1981, she helped Murdoch buy The Times and The Sunday Times by not referring his bid to the regulator, the Monopolies Commission, which would have blocked it. In return, Mudoch’s papers supported Thatcher.

How the story developed from something minor to an earth-shattering revelation that resulted in the Leveson Inquiry is riveting. The Guardian was the only paper that pursued the lead. The rest of Fleet Street either kept quiet or poured scorn on the paper, even when Davies found evidence of a massive cover-up by the Metropolitan Police. The turning point was the revelation that the phone of the murdered schoolgirl, Milly Dowler, was hacked. This provoked public outrage and led to the closing of News of the World and the defeat of the BSkyB bid.

Davies alternates chapters about the investigation itself with chapters giving the background, building up to the hacking scandal. I liked this because there is only so much of the power play and low behaviour I could stomach at one go. Davies uses special words for some of this behaviour: blagging (calling up companies pretending to be staff to get information) and monstering (destroying someone by publishing stories that are a mix of lies and stolen personal details). He paints a grim picture: anything goes, as long as you get the story. “In the newsroom without boundaries, there was one thing which was not tolerated: failure.” The book encapsulates the worst—and the best—of journalism.

There is victory at the end—sort of. But eventually, time passes and things go back to normal. Davies’s conclusion is sobering: “For a while, we snatched a handful of power away from one man. We did nothing to change the power of the elite.”

One thought on “Hack Attack: How the Truth Caught Up with Rupert Murdoch—Nick Davies”