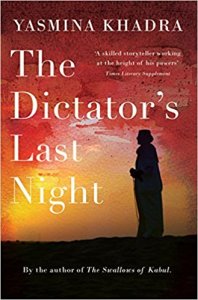 Translated from French by Julian Evans

On 20 October 2011, the news was full of the capture of the Libyan President Muammar Gaddafi, found hiding in a culvert in near Sirte. It was an unimaginable fall for the man who saw himself as the saviour of his people who, in turn, loved him. Outside Libya, he was known for possessing a sense of theatre, and for being one of the very few—if not the only—heads of state who had women bodyguards. But he was also a ruthless dictator who destroyed any individual who opposed him, or whom he perceived as being a threat.

With this book, Yasmina Khadra takes us into the mind of Gaddafi during his last night. It is a tour de force—although The Dictator’s Last Night is a fictionalized account, it feels very real. We know that the events narrated actually happened, but it is the glimpse into the dictator’s mind that is fascinating. It’s a short book at 180 pages, but Khadra tells you what you need to know, and quite frankly, I did not want to be in Gaddafi’s head for longer than that.

As the book begins, Gaddafi and his men have had to flee Tripoli and are hiding out in a disused school in Sirte. For the next few hours, he reminisces, rails at the Libyan people for betraying him and worries about his sons who are battling the rebels. He is a contradictory mix of supreme self-confidence with a hunger for approval, of sentimentality and brutality. When his security chief, Mansour Dhao, says he wants to resign so he can spend his time praying for forgiveness for his acts of injustice and cruelty, Gaddafi takes it as a personal attack. (After all, Dhao was acting on his orders.) “Do you think I was unjust or cruel to my people?”, he asks. Dhao’s only response is “Only God is infallible”. Gaddafi can barely contain his rage at this equivocation. He is, after all, “an exceptional being, providence incarnate, envied by the gods, able to make a faith of his cause”.

Khadra uses the journey into Gaddafi’s past to try to understand the circumstances that shaped him. Growing up as a poor and fatherless Bedouin, he managed to get ahead and join the army, even going to Sandhurst in the UK after military training. But that wasn’t enough: as far as the establishment was concerned, he would never be one of them. Not a man to ever forget or forgive a slight, he carried out his own vengeance once he took power.

There are some interesting touches. Gaddafi has recurring nightmares before something life-changing happens, and these nightmares always involve Van Gogh as he appears in his self-portrait with a bandaged ear. He is visited by Van Gogh on his last night, the end of which would see him and his men flee the school and be ambushed by rebels. But true to himself until the end, Gaddafi sees himself not as a hunted man but as a Christ-like figure. As the mob descends on him, he calls out “Forgive them, Lord, for they know not what they do”.

This is a haunting book, beautifully and vividly written. Khadra is a well-known Algerian writer. This is the first book I have read by him, and I was completely absorbed in his world.

A final note: I read the book in French (La Dernière Nuit du Raïs), so the quotes are my translations, except for “an exceptional being…”, which was taken from the extracts of the English translation on Amazon UK.

One thought on “The Dictator’s Last Night: Yasmina Khadra”