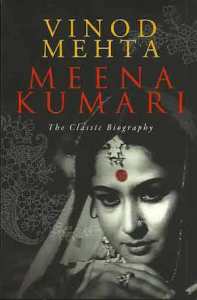 For many years, I’ve enjoyed the writing of Vinod Mehta, the editor of the Indian newsmagazine Outlook, so I was looking forward to reading his biography of Meena Kumari, an iconic Indian actress who died in 1972. But the biography was written on a commission soon after her death, when Mehta was a young man. And it is very much a young man’s book—cocky and self-assured—which is a pity. If he had written it in the last ten years, it would have been a more thoughtful work.

In an introduction to this recent edition, Mehta admits to this. He had been influenced by Norman Mailer’s style of writing, which was to insert the author into the text. You can never really forget that Mehta is writing this book, which means you cannot really lose yourself in it. I wish he had edited it and ironed out some of the annoying tics, such as the constant references to “my heroine”.

However, the story itself has enough weight to carry it through. For those unfamiliar with Meena Kumari, she was a well-known actress who worked in Hindi films from 1939 (as a child actress) until her death. She was known for playing tragic roles, including in one of my favourite films, Pakeezah, to which Mehta devotes an entire chapter. She was prolific and very talented, so much so that in 1963, she got all three nominations for the Filmfare Best Actress award!

Before I go any further, let me clarify something: I refer to Hindi films/movies throughout—Meena Kumari pre-dates Bollywood, a term I use only because it is a shorthand for a certain kind of film. I don’t like the term, any more than I like Nollywood (Nigerian films) or Tollywood (Tamil films). It trivializes the fact that these industries are specific to their culture; they are not just clones of Hollywood.

Rant over, let’s get back to the book. Meena Kumari was born Mahjabeen Bano in 1933 to an actor-musician father and a dancer mother and was one of three daughters. Both parents suffered from ill-health, so they pushed their young daughters into acting. Meena Kumari once said that she had started taking care of her family since she was four. Even as a child, she loved the camera and eventually became a huge star, with all the ups and downs that stardom brings. Her marriage to Kamal Amrohi, a director and a screenwriter much older than her, was an intense romance to start with, but soured in a few years. She had started drinking and eventually died of cirrhosis of the liver.

Amrohi wrote his masterpiece, Pakeezah, for her. It was of the few films he directed, and she finished it before she died. The story of a courtesan, Sahebjan, it is among the few Hindi films that does not portray courtesans merely as entertainers but as women with hopes and dreams of their own. The film had been in gestation for years. Amrohi came up with the idea in 1958, wrote the script by 1960, but the film didn’t reach cinemas until 1972. This was partly due to Amrohi’s perfectionism, Meena Kumari’s lack of availability and the state of their relationship. It was Meena Kumari’s and Amrohi’s greatest film and her swansong. The language is sheer poetry, as are lyrics of the songs. And Meena Kumari is wonderful as Sahebjan.

What I enjoyed in this biography is that Mehta looks for the person behind the myth of the “great tragedienne”—the unfortunate woman who was used by everyone, especially men, a myth that Mehta does not entirely buy. Meena Kumari could be difficult and self-destructive, but she was also a generous, intelligent, literate woman (mostly self-taught—she wrote Urdu poetry), who not only knew the names of all the crew on a film set, including the man who served tea, but remembered the details of their personal lives. There is a wonderful story about a journalist arriving on a set to interview her. She was one of the biggest stars in Bombay at the time. He couldn’t find her and was directed to where some of the crew were sitting on the floor, drinking tea, and there she was on the floor among them. I know the next time I watch Pakeezah, I’ll be looking at Meena Kumari in a different light.