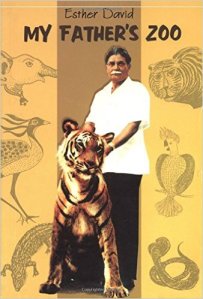 How many people you know grew up in a zoo? How many people you know have a father who started a zoo? This is the stuff of my own childhood dreams (before zoos became bad places), and I became very excited when I saw this book at the Hyderabad Literary Festival 2016. I bought the book, met Esther David who had come for one of the sessions, and told her how fascinated I was by the idea of the book!

I really enjoyed reading this small book. Esther David’s father Reuben David (1912-1989) set up the Hill Garden Zoo in Ahmedabad, which later became the Kamala Nehru Zoological Garden. A veterinary doctor, Reuben grew up with animals and had a way with them that surprised and amazed people. He opened a a clinic for dogs, and was working there when the Ahmedabad Municipal Corporation decided to make a zoo around Kankaria Lake, and invited him to set it up.

‘My father’s zoo’ is about how the making of this zoo, and how it slowly filled up with animals and birds – flamingoes, bearcats, orangutans, brown bears, anteaters, tigers, lions and many others. There are interesting stories and incidents about each animal that was brought in. Hallagulla – the angry langur, Shikha, the homesick sarus crane, Vanraj and Vanrani – the rescued lion cubs that survived because of Blackie the dog who fed them along with her pups, about Parvati, the three-horned, six-legged bullock that was bought off from a sadhu who was exploiting it, and so on.

Writes Esther, “It was amazing to see father playing with a full-grown lion as if a lion was his pet dog. I often saw father in Montu’s cage as it was the laboratory for his experiments in co-existence. He had Montu from the time he was a cub and had introduced him to other animals. So Montu lived with two dogs, a tiger and a stump-tailed Macaque. They lived in total harmony but later, the tiger Raju was given another cage as Montu and he not only had ego problems, but were always in competition for father’s attention. So instead of Raju, an Alsatian was introduced into Montu’s cage”.

Illustrated in black and white by Esther, this tribute to her father makes delightful reading for children and animal lovers.