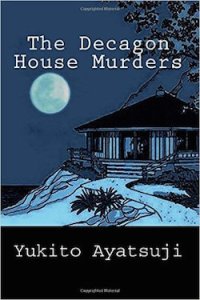 The island of Tsunojima holds a dark secret. A year ago, the main house on the island burned down, killing four people—the architect, Nakamura Seiji and his wife, Kazue, and the couple working for them. Except that when the police examined the bodies, they found that the two couples had been murdered before the fire. The fifth person on the island, the gardener, could not be found. The police therefore assumed he was the murderer, and the case was closed.

A year on, a group of seven students, members of a mystery club, decide to spend a week on the island, living in the little house that was left standing, the Decagon House. There are no connections with the mainland—a boat drops them off and will collect them a week later.

Meanwhile, on the mainland, Kawaminami, who was the only one of the group not to go the island, gets a letter purporting to be from the dead Nakamura, accusing him of murdering his daughter, Nakamura Chiori. Kawaminami finds out that the others—who are now on the island—had also received these letters. Chiori, a shy girl, died from alcohol poisoning after a night out with the mystery group, who encouraged her to drink too much. As he starts investigating, one by one, the group on the island are being murdered. Could it be that Nakamura Seiji survived and is lurking on the island to take his revenge? Or is it someone pretending to be him?

The Decagon House Murders is based on Agatha Christie’s And Then There Were None, which, I think, is one of the best whodunits ever written. The premise is similar—a small group on an inaccessible island, being murdered one after another. But Ayatsuji’s book is from a very different culture, which makes it interesting. The book is part of a Japanese whodunit tradition called honkaku, where the author reveals the clues in the course of the narration, allowing the reader to work it out. The author isn’t supposed to pull any rabbits out of the hat, so to speak. However, in spite of this, I certainly didn’t figure it out, and the ingenious solution had me scrambling through the book to look for the pointers.

There were enough twists in the narrative to keep me intrigued, but The Decagon House Murders is stronger on plot than on character. The group on the island are fairly two dimensional, and rather pretentiously, they call each other by the names of famous mystery writers—Ellery, Poe, Leroux, Agatha, Van, Orczy and Carr—all of which means that as the reader doesn’t get too emotionally involved with them. The characters on the mainland are more convincing—they are drawn with a bit more depth and are referred to by their actual names.

There is also jarring note in the translation. There is a passage early on in the book when the fisherman and his son take the group to the island. The fisherman speaks in what is meant to be a “country” accent but it comes across as fake. Fortunately, he doesn’t appear again!

The introduction by Shimada Soji, a well-known writer of honkaku, is worth reading, especially if, like me, you know almost nothing about Japanese crime novels. Honkaku flourished from around the 1920s until the mid-50s, when it was replaced by a more social/natural form of crime writing. It came back in the 1980s with Shimada’s work. Shimada provides the reason for the sketchy characterization: honkaku is almost like a game, which means that the writers don’t bother with fleshing out their characters or other “literary” devices. The puzzle is everything.