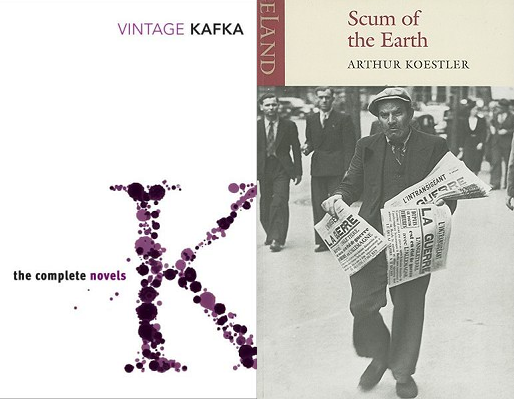 The Scum of the Earth by Arthur Koestler

Arthur Koestler was a curiosity. So often spent rowing against the tide, his life personifies the experience and aura of the twentieth century intellectual more than any other. So then, how appropriate that his first-hand rendering of the French transition to Vichy, his reminiscences of a country on the eve of darkness, should constitute a life-imitating-art homage to the novels of Kafka.

Koestler’s unhappy tale of victimisation, persecution, beatings and arbitrary imprisonment was well known to many progressive intellectuals during Europe’s dark century. Preserving a vital historical truth, one obscured by post war myth making, he shows how his caste, the antifascists and the progressives, were truly the enemies of everybody: The Scum of the Earth. But beyond this, Koestler’s journey talks to the deeper quandaries of modernity. Or rather do his perceptions, at least those he chose to record and in that peculiar manner of his. Consciously in one regard, his tale affirms the cautionary motifs of Kafka’s three great – and yet unfinished – works. And how fitting it was, all things considered, that when modern civilisation finally plunged over the edge, whimpering all the way down, the descent should have passed through these labyrinthine fables. This is the aspect of Koestler’s memoir which sustains its relevance, beyond mere historical record, in some regards exceeding even his most celebrated work, Darkness at Noon, in this important duty.

Pictures emerge from Koestler of a hospitable environment for collaborationist Vichy, incomplete and fuzzy snapshots betray apathy and defeatism as Europe meekly shuffled up to the entrance of hell. The French nation lost before French soil. Few of the many disbelieving souls: the journalists, publishers, critics, writers and activists trapped in the country, those who represented one last great wave of the public intellectual, lived to remind us of this. We must listen instead to their echoing silence. Accordingly, the most exceptional aspect of Koestler’s story remains his a-typical ‘happy ending’ of escape to Britain. How close he came to joining those forced into suicide by the refusal of the French authorities to safe guard them from Gestapo torture chambers only Koestler knew, the accuracy of his account on this beside the point, for survive he did as too many did not.

The empirical outline of his reminiscences runs something like this: as his afore mentioned great work, the novel Darkness at Noon, inched its way towards completion, a book to dispel the illusions of a generation, Koestler and his lover, the English sculptor Daphne Hardy, enjoyed an idyllic French existence in a château near the Italian border. But the Molotov-Ribbentrop pact and a dawning realisation of war’s inevitability shattered their peace, so the pair returned to Paris where Koestler was imprisoned. First held at the Roland Garros tennis stadium, he was moved to the Le Vernet concentration camp. Surrounded in Le Vernet’s abject conditions by a wide stripe of ‘suspect aliens’, two features are especially telling. The first is that, reduced to the most abject squalor and degradation, a rag tag and completely broken down collection of International Brigade volunteers returned from struggling against Franco, were the lowest of the low in Le Vernet. The idealists had become the despised. And second, the only inmates initially offered an exit route from the back breaking labour, the filthy living conditions and the unpredictable physical brutality of some of the guards were those Italians permitted to throw themselves upon the mercy of Mussolini’s fascist government. Koestler’s release is eventually secured by virtue of influential connections and a nascent literary reputation.

He then embarks upon the (self-consciously) Kafkaesque leg of his journey. Rummaging through an obscure bureaucracy in an effort to settle his case, or at least to further it somehow, the intrepid Hungarian only encountered long dark corridors sealed with dead ends. Continually frustrated by endeavours to discover what exactly he was suspected of, whom the relevant authority was, and how one might resolve an untenable situation in which he was perpetually exposed to the threat of re-arrest, he got nowhere. The authorities were impossible to pin down, every lead a chimera, and yet just like Kafka’s heroes Koestler never failed to jump through an endless series of bureaucratic hoops, Byzantine in their intricacy and evasiveness, driven only by increasing desperation. Kept waiting for hours upon hours in various official ante chambers, never managing to penetrate the administrative smoke screen, Koestler was gradually deprived of hope, subjected to a slow and unremarkable torture, a torture of the spirit, akin to its physical equivalent in Le Vernet.

Finally, as German forces advanced upon Paris, Koestler was arrested once more. Standing at the gates of the concentration camp, a premonition washed over him. Once passed through there would be no returning back from these iron walls alive. For so many of his fellows this was of course the case. Miraculously, in the event he was able to convince an officer that his arrest had been an administrative error. He then made good his escape by enrolling in the Foreign Legion and embarking on a headlong dash for freedom under an assumed identity. Gradually, all of his few remaining worldly possessions were lost, he became separated even from Daphne, his lover, his intellectual and his sensual companion, and at one point he found himself observing an advancing German military unit. True to life long form, only heavy drinking and liberal doses of luck saw him through a situation of extreme peril.

Koestler himself draws a parallel with Kafka’s work. This being the obvious one of certain resonances with the mysterious court system depicted in The Trial. More interesting, not least as Koestler either never saw or just never recorded this, are some others. Because really Koestler’s experiences around the capitulation of France speak to predicaments mulled over in all three of Kafka’s novels. One recurring theme is how easily a subjective notion of guilt can bring an individual to do the persecutory work of oppressive authorities for them. In The Castle the Barnabas family reduce themselves to penury, premature senility and ruin, all based upon an assumption that the authorities are displeased with them. Even Joseph K.’s various efforts to resolve his case in The Trial are ranged against a High Court that does not actually seek to interfere with ‘the accused’ until it sends out his executioners. Likewise Koestler’s wearing efforts to penetrate the bureaucracy were self-driven. Disconsolate, he finally blurts out ‘perhaps I was really guilty, I and my like; perhaps our guilt was the past, the guilt of having foreseen the catastrophe and yet failed to open the eyes of the blind.’ And thus it was. A man who had dedicated himself to the anti-Fascist cause assuming responsibility for the French nation’s Joseph K. like submission, all its energies spent crawling through the attics and claustrophobic passageways of the court offices. This was punishment through means above ends, much like certain aspects of the contemporary American justice system, wherein ‘jails’ holding people merely accused of crime and not yet officially guilty are indistinguishable from ‘prisons’ housing the convicted. In these jails, notionally assumed innocent persons are treated like criminals, utterly deprived of liberty and subject to the whims of the administration, or of any given officer on the ground, exposed to the many physical and psychological dangers of the environment within which they are obliged to reside.

Unwittingly, Koestler also shares the fate of Karl Rossman in Amerika and numerous other characters in Kafka’s fiction, including the main protagonists in both The Castle and The Trial. Trapped in a seemingly hopeless downward spiral, the gradual descent of Koestler’s material and social standings is occasioned through a series of minor-degradations and petit-humiliations. Death by a million paper cuts. Like Karl, Koestler even ends up abandoning his name, having little else left to give after all of his possessions and pretensions have first been cast aside, and in this same moment Koestler was to gratefully resign himself to a fate he had previously scorned as beneath his dignity. Just as in Amerika, when a world-worn and ground down Karl Rossman is presumed to eventually accept a position in Robinson’s employ, after dismissing both him and fellow hobo Delamarche as thieves and scoundrels, Koestler’s decision to enrol in the Foreign Legion was one he had rejected not long before, on the point of principle that the Legion, although expected to die for France, was not deemed worthy of stepping foot on French soil. The chipping away of resistance, of dignity, the slow corrosion of the spirit suffered by the down trodden gives pause for thought. Of course, Koestler was only temporarily, and rather superficially, consigned to this condition. Primarily, his experience was that of the privileged dilettante. But we nevertheless find a truth revealed by this parallel, a basic component of that which we broadly term ‘poverty’.

Kafka’s answer to the problems of oppressive authority was not, as both Joseph K. and Koestler so keenly did, to challenge it head on, but rather to side-step it. Despite his self-awareness of certain parallels between his own experience and those of Joseph K., this was an option that Koestler seems never to have considered. And, of course, it must be much easier said than done. But perhaps the best option open to Koestler was always to enrol in the Legion, yet doing so sooner than he actually did was something his famous pride and egotism would never allow.

One hundred and eleven years since his birth, more than three decades removed from his controversial suicide, a final enterprise upon which he selfishly permitted a healthy, young third wife to accompany him, Scum of the Earth could yet come to be seen as Arthur Koestler’s most enduringly important work. For within it we discover a life-sized, vividly coloured, portrait of the ease with which human dignity will be compelled to chip away at itself. 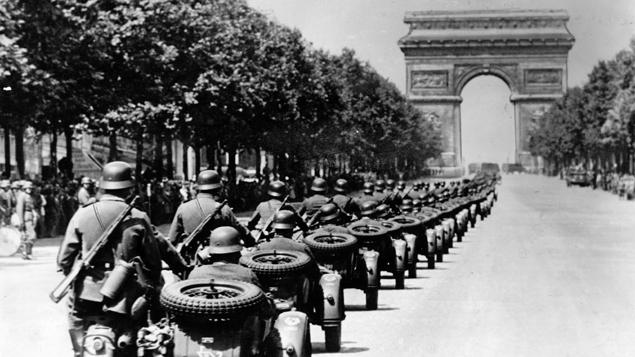