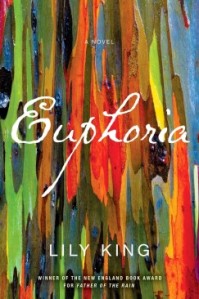 Using an incident in the life of anthropologist Margaret Mead (about a trip that Mead—Nell Stone, in the novel—had taken with her husband to study tribes in New Guinea), Lily King turns it into a story about relationships and the inability to completely know someone, let alone an entire culture.

The book is set in the 1930s, a time when anthropology was still a new science. It opens with Nell Stone and her husband Schyler Fenwick—both anthropologists—having to flee the Mumbayo, a fierce tribe they had been studying in New Guinea. They plan to leave for Australia, but a chance encounter with fellow anthropologist Andrew Bankson changes their minds. Bankson, who is lonely and recovering from a failed suicide attempt, persuades the couple to stay instead with the Tam people, upriver from the Kiona with whom Bankson is living.

Fascinated by the way Nell and Fen immerse themselves in tribal life, Bankson spends a lot of time with the couple and appears to fill the gaps in their marriage: when he’s around, the couple seem to get on much better. There is an underlying tension between Nell and Fen—she has just published a bestseller, leaving Fen feeling inadequate and threatened. The strain is made worse by the couple’s inability to have a child, something Nell desperately wants. Not surprisingly—given both his vulnerability and the fact that he has finally found someone to talk to—Bankson falls in love with Nell.

But Nell’s a free spirit. When she met Fen, she was already in a relationship with an anthropologist, Helen Benjamin, and had been forced to choose between the two—something she resented: “I am angry that I was made to choose, that both Fen & Helen needed me to choose, to be their one & only when I didn’t want to be a one & only”. But Fen equates love with possession, a notion alien to Nell. He is also fiercely competitive and determined to outshine Nell, and it is this desire—which he must fulfil at all costs—that brings down everything, ending with the two having to flee a tribe for a second time.

The only one of the three whose backstory we are told in detail is Bankson. As an older man looking back, he is the narrator of a large portion of the book. He has lost both his brothers, one to the First World War and another to suicide. His father, a zoologist, had expected the son to follow in his footsteps and could not forgive him for taking up anthropology instead. When this story takes place, Bankson and his mother—soft and sweet once, but now “needy and despotic, a tyrant who seemed not to know what she wanted for or from her last remaining subject”—are the only ones left. Part of the reason for him ending up in New Guinea is to be away from her.

But the character who is the most vividly drawn is Nell, with “a small face and large smoke-colored eyes like a…small marsupial…and a thick plait down her back”. Bankson is drawn to her quick mind and her passion about her work. He says, “For so long I’d felt that what I’d been trained to do in academic writing was to press my nose to the ground, and here was Nell Stone with her head raised and swivelling in all directions. It was exhilarating and infuriating and I needed to see her again.”

As for Nell and Fen, there is a lot about them that is not entirely clear. Did Fen and Nell have a baby that did not survive? There are hints that Fen was violent, but nothing is ever made explicit. And we never really know what happened with the Mumbayo except that it traumatized Nell, and may have had something to do with a child.

Relationships dominate the novel—between men and women, and between intellectuals who are competing with each other. Fen’s resentment of his wife’s success contrasts with the attitude of the Tam men who seem to be perfectly comfortable to have their women in charge. Nell wants to write about this reversal of traditional gender roles, but Fen dismisses it, saying that she is being manipulated by the women—which reflects more on Fen’s insecurities than on Nell’s work.

Euphoria raises questions about how much you can actually know a person or even a culture that you do not belong to. Although Nell and Fen feel they know the Tam, there always will be a part of that culture they will never really come to grips with. During one of Bankson’s visits to the couple, the three of them come up “The Grid”, which is essentially a cross with compass directions marked on each line, each standing for certain characteristics. The North is strong-willed, aggressive, assertive, possessive; the South is flexible, caring, responsive, compliant (a reflection of 1930s Western beliefs!); the West is pragmatic, linear, organized, black-and-white; while the East is creative, artistic, spiritual, shades of grey. Into this grid, the three of them try and fit cultures, nationalities and even people. The Grid is indicative of our need to classify everything into neat pigeonholes. The reality, of course, is that people—and therefore cultures—defy this kind of neat characterization and in the end, are never entirely knowable.

Euphoria is one of the best kinds of novels, well-written and engaging. It raises issues that have you thinking about them long after the book is finished. I liked that there were some things left for the reader to figure out: not all loose ends are neatly tied.

A final word about the stunning cover of the American edition (the one pictured here): it is a photograph—not a painting—of a rainbow gum tree. In the book, Bankson’s house is built around one of these trees. Imagine having this growing through your house!