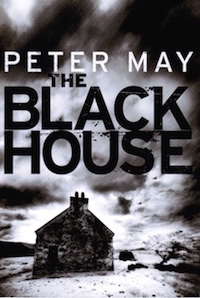 Peter May has written an atmospheric and intricately plotted novel set on the Isle of Lewis in the Outer Hebrides in Scotland. The Blackhouse is a police procedural and a story about a man forced to come to terms with his past.

Fin McLeod is a police detective in Edinburgh, grieving the death of his eight-year-old son and the subsequent breakup of his marriage. He is not someone who is comfortable with emotions, whether his own or others’. So when he is asked to go to Crobost on the Isle of Lewis to investigate a murder that is similar to a recent one in Edinburgh, he jumps at the opportunity. Even if this means going back to the hometown he left 18 years ago and swore never to return.

Coming back to Crobost after all these years, Fin “felt like a ghost haunting his own past, walking the streets of his childhood”. He meets up with people he was in school with, including Artair, his best friend who is now a bitter drunk and married to Marsaili, the woman Fin was in love with. Fin’s return stirs up unfinished business from the past that needs to be dealt with.

The chapters alternate between a third-person narrative about the murder and a first-person narrative of Fin’s childhood. Together, they form a vivid picture of this small and tightly knit community where secrets are buried and never spoken of. And the town is full of secrets that continue to haunt the living. But the past cannot be buried forever, and secrets have to be revealed if another murder is to be stopped.

The book is beautifully written, bringing to life the people and the landscape, which is almost a character in its own right: “a brooding landscape that in a moment of sunlight could be unexpectedly transformed”. But the author also provides the most graphic description of a post-mortem I’ve ever read, with more detail than I felt was necessary. His account of the guga hunt—the culling of 2,000 gannet chicks, which are eaten as delicacies—is also extremely detailed, but unlike the post-mortem, the description is nearly hypnotic. Following a centuries-old tradition, 12 men go out to a rocky outcrop, where gannets nest in their thousands, to catch the chicks. The bond that forms between the men supersedes any other loyalty; what happens on the rock stays on the rock. But what did really happen out on the rock when Fin and Artair went for the first time?

The Blackhouse is the first of the Lewis trilogy, which includes The Lewis Man and The Chess Men. I can hardly wait to curl up with the next two books!

One thought on “The Blackhouse: Peter May”