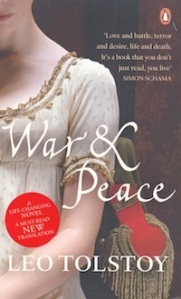 Such a joy to have read Tolstoy’s absolute, unparalleled, masterpiece now, without the spectre of deadlines and exams. This time around, I wonder what, if anything, I even got out of this work of extraordinary simplicity and power in my earlier readings, when I was a student of literature.

Many critics and commentators have written brilliant essays about the things one calls the major themes of War and Peace. Tolstoy’s penetrating critique of what is flawed in traditional historical reports, his riveting portraits of Napoleon and Kutuzov–two historical figures–in a work of fiction, the sheer panoramic sweep of Russia’s high society as well as its peasantry that this novel achieves, his bewilderingly large cast of characters (all of whom are scrupulously individualized), and the life-affirming philosophy that runs through the entire novel…these are so well examined and explained by generations of scholars that anything I might say would be superfluous.

This time when I read War and Peace, Tolstoy’s masterful treatment of the “coming of age” theme grew more and more central to my enjoyment of the work, delighting and astounding me that it was a coming of age story of a female character, from her girlhood to womanhood.  This character, Natasha Rostova, is vivid, vibrant, and unforgettable.  Everyone else in the fictional world of this sprawling novel in one way or another influences the course of Natasha’s unfolding story. Tolstoy’s control over his numerous characters held me in thrall this time.

And the sheer audacity of Tolstoy’s aphoristic pronouncements made for yet another level of enjoyment. He captures the very essence of human experiences, leaving you to marvel that one man could have such a tender understanding of what each one of us has felt at some point in our own lives.

Suroor, thank you for this blog.