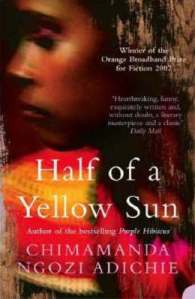 It took me a while to get to this book but when I finally did it consumed me. It kept me up all night and haunted me well after I was done with it.

Chimamanda Ngozi Adichie’s second novel, Half of a Yellow Sun tells the story of two sisters and their lives during the years before and during the Biafra war in Nigeria in the 1960s. The sisters, Ollana and Kainene straddle the two worlds of their own lives and their own conflict between the public and the private spaces they come to occupy.

I watched a scene from a film called Butler the other day, which put so much into perspective. One of the characters is explaining the relationship he has with a woman – he picks up two hangers and starts spinning them in opposite directions and says “We are the movement, opposite and uncontrolled.” He then brings the hangers together so that they can spin around the one another, sometimes colliding but often working off the other. “And this,” he says “is what happens when we are together.” This was fascinating to watch (and I tried it later but my hangers flew half way across the room!). It reminded me of Half of a Yellow Sun..the characters revolve around an axis that they create – a center that is defined by their own understanding of the world that they inhabit. And while these centers are imaginary, like the Earth’s own axis, their force is controlled by the center of gravity – here language, self, being and space. So, when the two come together and their axis’ is arbitrary and unknown to the other but spin around each other, working through spheres of what is ‘unknown’.

The novel shifts through the spaces of their lives and loss – both together and apart, the stories of the people who inhabit these spaces and the story of the young houseboy Ugwu. The conflict of Northern and Southern Nigeria moves between the background and the foreground but lingers through the course of the novel and reflects the relationships that Adichie attempts to explore. The question that haunts the narrative is the borders that we create – where the sisters, who come to inhabit the postcolonial world, both in very different ways, and from where different points of view. The center that holds the work together is the idea of the frailty of love – where the loss of one can explain the other and visa versa.

This is an exquisitely crafted book, the language has a beautiful quality of dripping and freezing and dripping again until it reaches a razor sharp pointed edge. Read it if you haven’t already.