A gangster book with a 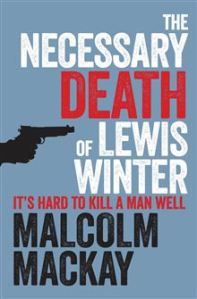 difference. We follow a professional hitman, Calum MacLean, as he figures out how he is going to kill Lewis Winter, a smalltime drug dealer who has become a thorn in the side of a powerful criminal gang. The book is set in Glasgow, which over the course of the story, emerges as a character in its own right. MacLean takes his time, following Winter around, getting to know his habits. The hitman is a consumate professional: he believes in killing cleanly, focusing only on the target and ensuring there are no other casualties.

But there are other people in the mix: Winter’s demanding girlfriend, Zara Cope; Zara’s lover, Stewart Mcintosh, who is in way over his head; and PC Marcus Mathieson, who plays both sides but tries to hold on to his integrity. Other people make things unpredictable and messy. The man who ordered the hit, Peter Jamieson, wouldn’t hesitate to throw MacLean to the dogs if he thought things were getting messy. And MacLean is soon fighting to stay alive.

The most striking thing about the book is the voice—unhurried, matter of fact, without any dramatic flourishes. Very much like MacLean himself. I found myself rooting for him, in spite of what he does for a living. It’s unusual for a book in this genre—there are no pyrotechnics, but the pace never lets up.