More than forty-five years have passed between my first acquaintance with Balzac and this renewal.  Of that first work I read (Pere Goriot) I carry a strong impression, mainly of the atmosphere. Had I not read Balzac then, I guess I would never got around to this one, a copy of which has been in my collection since 1972…

What a great work this is. Unforgettable characters, vivid settings, fictional destinies that confound a reader’s fond expectations and yet confirm that life follows no formula.

A gentle and timid mother, who adores her first son, who is an officer and rascal. Her second son is an artist, whose natural goodness the mother hardly notices. The family’s penury and ever diminishing prospects for a decent life are as much a story of one family as a portrayal of the gloomy post –Napoleanic years in France.

There is an inheritance due to Agathe, the mother, which she has been denied. The plot thickens as she begins her doomed odyssey to reclaim it. We meet character types depicted with mastery and knowledge, but always imbued with a strong strain of satire that makes you shake your head and say, “Don’t I know this sort!”

Blazac’s fiction keeps you glued to the book; the encyclopedia he interweaves astonishes you with nuggets of information on history, art, and politics. Students of fiction who love delving into allusions will find a treasure house of fun with this profound and beautiful novel. 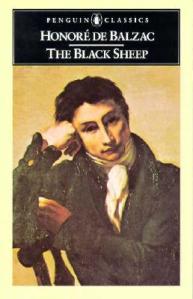 One thought on ““The Black Sheep” Honore de Balzac”